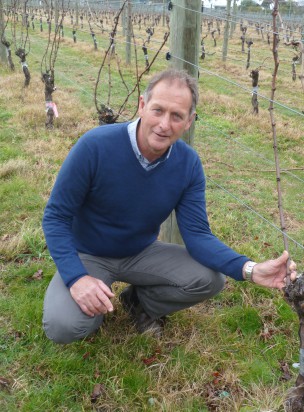 The wine and vine industry has nearly always featured in Nick Hoskins’ life.

Riversun’s director of viticulture now consults with clients on vineyard planting, clones, rootstock, vine health and just about anything else they require.
It can take him countrywide from his Masterton base, where he also runs his own vineyard management  business.

Nick started in amenity horticulture for the Wellington City Council Parks Department, before he felt the pull to cross the ranges and settle in the Wairarapa, right when the first vines were being planted.

The surfing grandfather has been with Riversun since 1998. Back then he was chair of the Wairarapa Grapevine Improvement Group whose goal it was to improve the planting material people were putting into the ground.

It led to him being involved at a national level, and that was where he met Riversun founder Geoff Thorpe.

“We found we had a lot of similarities in the things we wanted to do and I decided it would be a good thing to be involved in,” he says.

It is a decision he has never regretted.

He lived for a while in Gisborne – Riversun’s home – but the draw to the Wairarapa was at work again, and he felt the need to get back to ground level, so he could share with growers the very challenges they too were facing.

Nick is still involved at national level in the industry – this time as manager of the New Zealand Winegrowers Virus Elimination Project  which focuses on the elimination of the devastating grapevine leafroll disease.